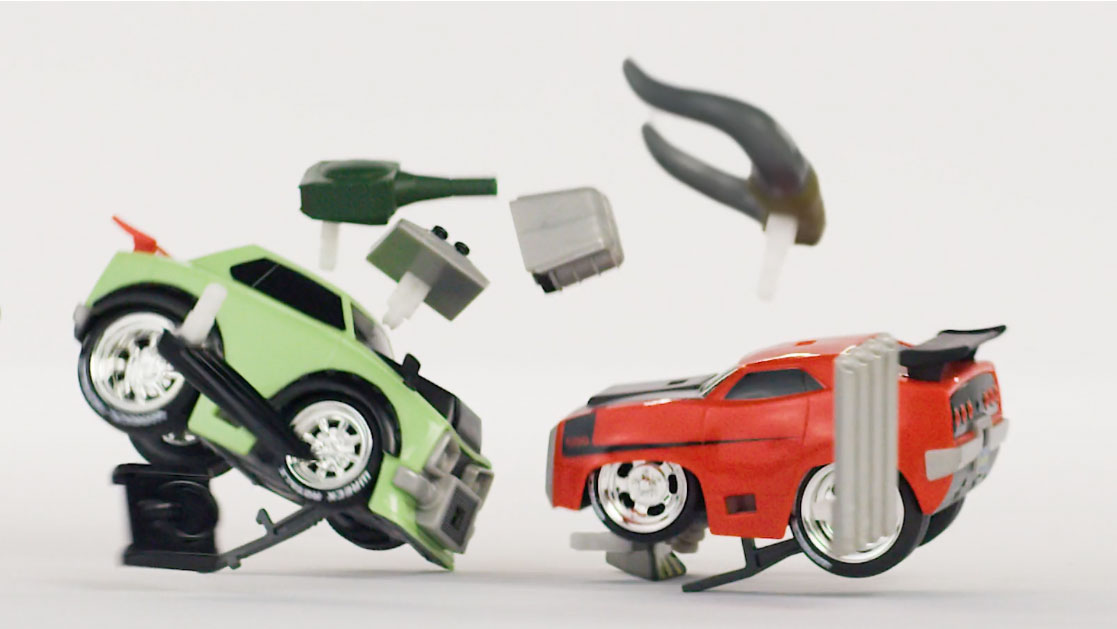 4 Lessons From the Making of a Toy Commercial

A plastic car is decorated as a shark, but not for long. It's hurdling toward another plastic car, this one with a clown's skull bobbling on top. In a moment, they will collide, shedding their identities. Each revert to a blank canvas, reborn as sheer possibility.

Can this moment shed some light on the nature of life itself?

After much meditation, it turns out the answer is "no." But crashing toy cars can teach you a few lessons that very relevant to production, or really any creative endeavor. Here are four important lessons you can take away from our experience making a toy commercial about wrecking toy cars.

The idea for this spot is extremely simple: take two toy cars and smash them into each other, over and over again. There are practical reasons to keep things simple, like having a tight deadline. But sometimes, the simplest idea is the best idea for the creative brief.

Here's the description of the Wreck Royale toy, from their website.

"Wreck Royale cars are new crashing, exploding vehicles with mix 'n match parts that kids will totally flip for! When Wreck Royale cars crash, their spring-loaded bumpers make them flip and their attached parts explode in all different directions."

Wreck Royale promises that if you crash them into each other, they will "explode" in exciting ways. It's a premise that works so well visually, so naturally we wanted to pack in as many crashes as possible. With only :30 seconds, why waste any time on something that would be less visually engaging than a car with bullhorns exploding in slow motion?

If you've ever watched Top Chef, you are familiar with the risk a contestant takes when they present the judges with an entree comprising of four ingredients. Their skills as a chef are exposed, as those four ingredients must be prepared impeccably in order to impress Tom Colicchio. While their dish is simple in description, a tremendous number of techniques must be employed to make sure they survive another week on the competition.

Lesson 3: Time is Finite, So Make The Most of It

We traveled from Atlanta and had a single day in Los Angeles to shoot two spots for Cartoon Network. This meant we only had a half day to shoot the Wreeecks commercial. When time is that limited, you need to have a detailed plan to make sure you hit the ground running.

Before the shoot, our artists created storyboards that sketch out each shot in the entire commercial. From those storyboards, we can make a detailed shot list for every scene. The shot list includes details like camera angle, lens type, and frame rate. By making these choices ahead of time, we are able to plan out a shooting schedule that maximizes efficiency.

When it comes to any type of production, the best plan is to have a detailed plan.

Lesson 4: Know Your Strengths, and Rely on the Strengths of Others

Our experience with the RED camera system, shooting toy commercials, and inserting animation and graphics into a live action spot gave us the confidence to know what frame rates to use, how to best light the scene, and how many takes we needed to make sure the cars were crashing just right. We are experts when it comes to production.

However, we are not the experts when it comes to Wreck Royale. One challenge was that we wanted to show off as many combinations as possible in the spot, as that is a key factor to Wreck Royale's story. We made sure to get as familiar with the product as possible in the two weeks between being awarded the job and the half-day shoot, but there's no way we could know as much as the brand specialists who were on set with us that day. They are living and breathing their product every single day, making them an invaluable asset to have on set.

We relied heavily on their knowledge to make sure the spot fully illustrated the playful combinations. Not only did it allow us to focus on what we do best, but it made the spot better and more authentic to their brand.